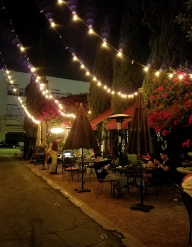 Enjoy a GROWING collection of restaurants,
schools, and shopping locations in the neighborhood,
MACARTHUR and LAFAYETTE PARKS
steps from the BUILDING, and Downtown and USC
only a short commute away.

The historic Park Wilshire building is at the heart of downtown LA, surrounded by parks, museums, and restaurants from around the world. Just steps away is the beautiful MacArthur Park where ducks and geese relax in a tranquil lake. A short drive to the west is the world famous Los Angeles County Museum of Art. Situated in Westlake, LA, Park Wilshire is within walking distance of Koreatown and a short drive to DTLA.

Just a few blocks from Park Wilshire are a growing collection of markets, grocery stores, and shops for your convenience, as well as two large parks our residence nestled between them. The neighborhood hosts two elementary schools, one high school, and several nonprofit organizations for youth to enrich the community. From dance studios to recording studios and local art centers, the creative hub that is Downtown Los Angeles extends to this part of the city and it’s just blocks from your front door.

The cultural diversity of neighboring Downtown Los Angeles, Koreatown, and Filipinotown yields convergence of delicious cuisines to enjoy nearby. Within two miles of Park Wilshire are the highly rated eateries of Nkwagala Vegan Café, hanchic. Korean fare, Doña Bibi’s Honduran restaurant, Los Mojcajetes Salvadorian kitchen, and Kubo Restaurant Filipino cuisine, to name a few, with plenty more options to discover. Let your taste buds guide you. If you’re not dining out, you can easily access your essentials during the week between the markets and grocery stores in the area. Or, on the weekend, enjoy one or both of the local farmers’ markets, then cross things off your shopping list at the local Vons, Target, or Walgreens.

Though deep in the city, the Wilshire neighborhood also has its share of greenery. MacArthur Park is one block east, with creative public art and the serene Westlake for you to peer upon its water from the park benches alongside. The Leavitt Pavillion hosts live performances, accessed by strolling across the paved walking trails throughout the mid-city block. Just three blocks west of Park Wilshire, you will arrive at Lafayette Park, where the local library and skate park can both be found. Lafayette’s recreation center has lighted areas where their soccer field, and basketball and tennis courts host community sporting events. Between these two parks, you’ll find the leisure you desire.

Unique Things to Do in Greater DTLA

To absorb an array of history and culture that Los Angeles has to offer, you can visit one or more of the myriad of museums within range. Observe and appreciate the finely curated galleries at the Los Angeles County Museum of Art, or The Broad Modern Art Museum, both renowned. Reinspire your wardrobe by witnessing the pieces displayed at the Fashion Institute of Design & Merchandising (FIDM), or recall your favorite artist’s platinum album at the GRAMMY Museum of L.A. Learn more about the history of the movement at the Social Justice Museum between Chinatown and Little Tokyo. Or, learn more about the history of the movie capital at the Hollywood Museum.

After a mere 3-mile drive from Park Wilshire’s destination, you’ll arrive on the scene at DTLA’s acclaimed Fashion District, a near 100-block span of local garment manufacturers and boutique retailers. Browse the many textiles, accessories and rare pieces that are missing from your closet, coming away knowing that you’ve found an item that truly completes your look.

For your morning workout you can hike to the overlook at Visa Hermosa National Park, then cool down by the pond and waterfall. In the evening, enjoy local theatre at the highly rated Dynasty Typewriter at the Hayworth, just around the block. Finally, to end your day, whenever that may be, by unwinding at the distinguished WiSpa, offering 24-hour rejuvenation among their varying Korean spa rooms to soothe any ailment you may feel when you enter.

Explore the historic Park Wilshire apartment building and all this dynamic locale awaits. All the districts in Los Angeles are yours to discover. The Museum of Contemporary Art

The Museum of Contemporary Art